A new tragedy we’re all dealing with, the death of George Floyd.

On May 25, 2020, George Floyd, an African-American man, died in Powderhorn, a neighborhood south of downtown Minneapolis, Minnesota. While Floyd was handcuffed and lying face down on a city street during an arrest, Derek Chauvin, a white Minneapolis police officer, kept his knee on the right side of Floyd’s neck for 8 minutes and 46 seconds; 2 minutes and 53 seconds of which occurred after Floyd became unresponsive, according to the criminal complaint filed against Chauvin. – Wikipedia

Security footage from nearby buildings and bystanders captured video of Floyd’s death. His death is horrifying, and the most accurate description is to say it was a brutal modern-day slow lynching.

No more information needs to come out about this case. The raw footage shows the egregious public execution had little to do with any laws broken.

The original call to the police department was because a clerk reported a person who looked like George Floyd, a black man, gave a counterfeit $20 bill.

Someone might have used counterfeit money during a pandemic and global recession with massive unemployment, and the response was to call the police for them to do what exactly?

No one should die for going to a store.

No one should die for being slightly intoxicated.

George Floyd should not have died begging to breathe and asking for his mother who only died 2 years ago. 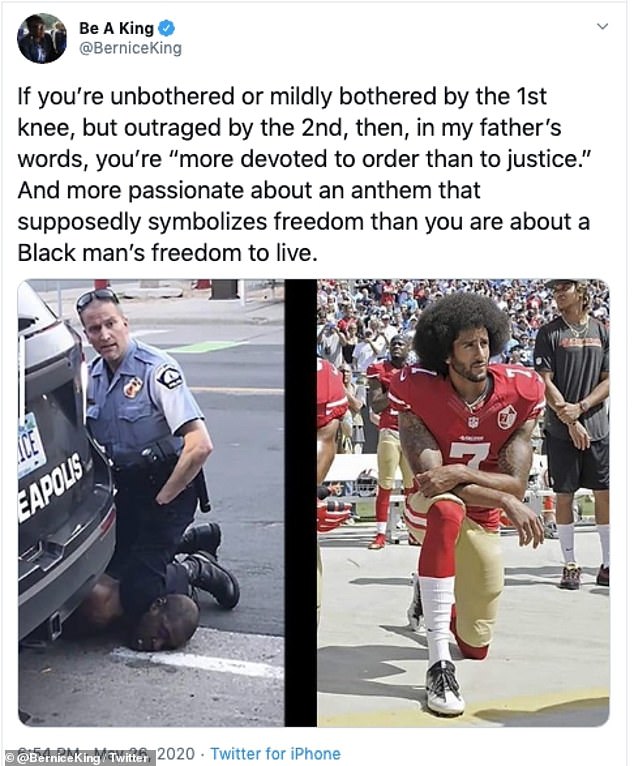 Activists like Shaun King worked with a community of organizers to demand justice. The backlash was swift. Derek Chauvin was surrounded in his home. Food he ordered delivered to him rarely if ever reached him as the deliverers learned who ordered. His wife left him. Finally he’s been taken into custody.

For those thinking this is a few bad cops, the police response to the protests is disproportionately violent. Protests have led to riots. It’s so difficult to know what’s happening on the ground. What’s the local history that led to the violence and vandalism we see? The more you look, the more fractured and nuanced the picture becomes. The Target we saw looted was built over a close-knit black community disrupted by the development of an I-95. The highway closed businesses and split homes which never recovered. Gentrification destroyed a community.

I was surprised to find my friends in my social network dismissing or approving of the looting while others were outraged. Looting triggers a moral reaction in us. Two wrongs don’t make a right. Small businesses especially shouldn’t be looted.

However, riots are the language of the unheard. Decades of peaceful protests haven’t brought the change we need.

We live in a society which values property over people. In our society, destruction of property is a proportional response when the police and government actively fight the idea that black lives matter.

So far nearly a dozen protests occurred in different cities and states. There are so many groups involved it’s difficult to keep the narrative straight. What I hate to see is looting being the main focus. We don’t know what’s happening on the ground. All we have are different statements and video footage from phones.

One local account of the police department makes the situation clear. The Minneapolis police department is over 92% white males from one suburb in the city. The mayor and police chief don’t have control over the police force, the union leader Bob Kroll does. Bob Kroll is a white supremacist and Trump supporter. The police department looks like they could’ve been hired directly from a Trump rally. The police are on strike, not enforcing laws other than breaking up protests. With no enforcement bad actors are free to loot and commit crimes however they want. Criminals know this, and they use protests for cover.

The police force are sending a clear message: we will police how we want or you will be arrested, pepper sprayed, blinded, and your communities will be burned and destroyed.

If the police wanted to justify an escalation of force, looting and property damage, mayhem, is exactly what they would use. Some protesters may genuinely be looters, but anyone who disagrees with the protests can easily slip into the crowd, cause destruction, and slip away, de-legitimizing the protest. Protesters take videos asking the vandals to stop the destruction, but the damage is done.

If a small percentage of looters poisons the protests, how many bad cops does it take to discredit a police department?

The protests on the ground are messy, tangled, complicated, like real life. Each side is antagonizing the other to escalate, but there’s unequal power. Police across the country have responded to protests with arrests, tear gas, curfews, and rubber bullets. Police cars have rammed peaceful crowds. We see videos of police pepper spraying non-violent groups indiscriminately.

Please be careful bringing children to protests, because the police don’t care what age you are.

Children, not even teenagers, were pepper sprayed.

Police have fired rubber bullets directly at the faces of peaceful protesters. In the last week, multiple people have lost an eye from rubber bullets or being hit with high velocity tear gas canisters. They have tanks rolling through city streets. 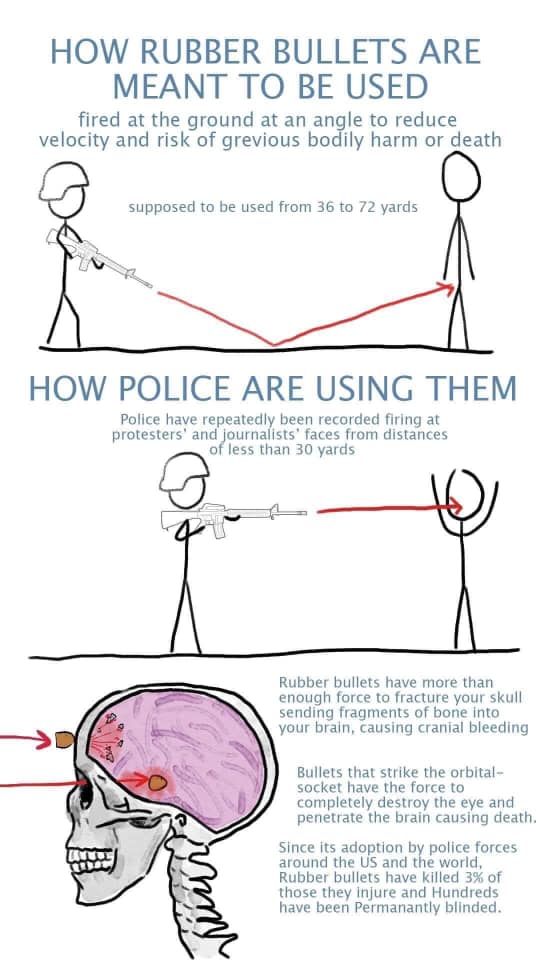 These protests and riots have shown the ugliest sides of American government and policing. 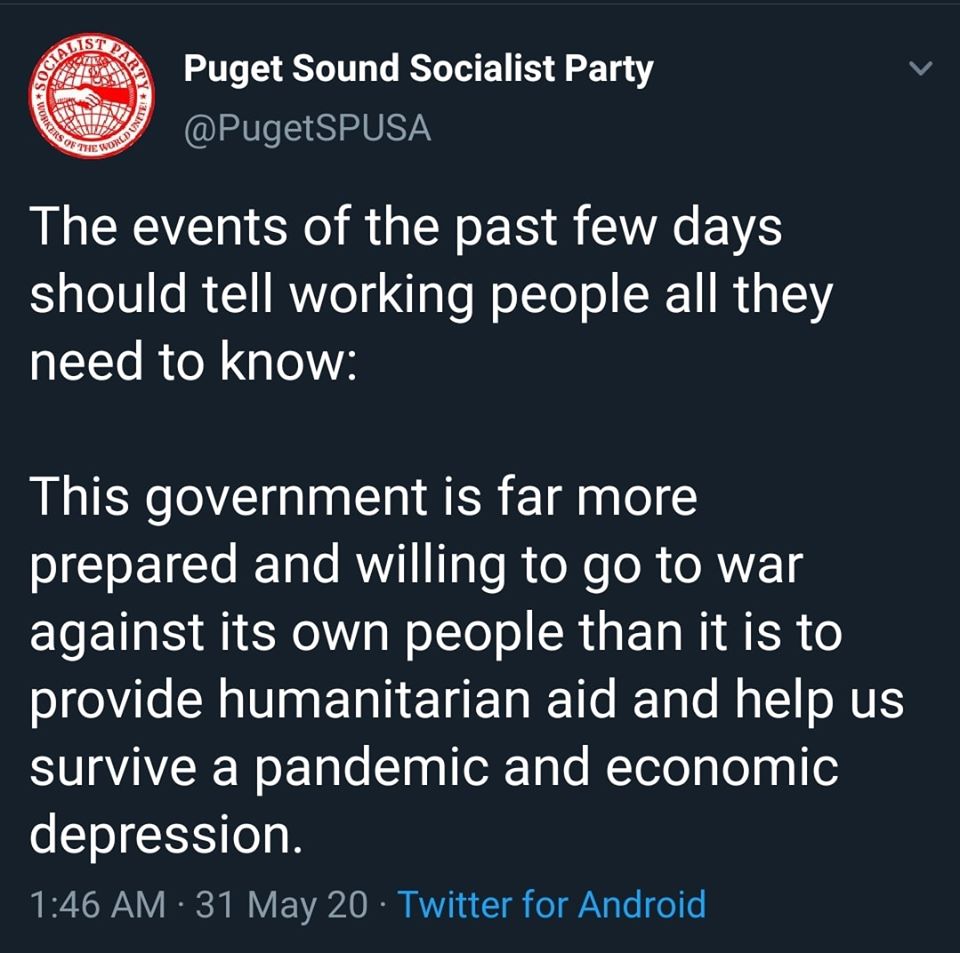 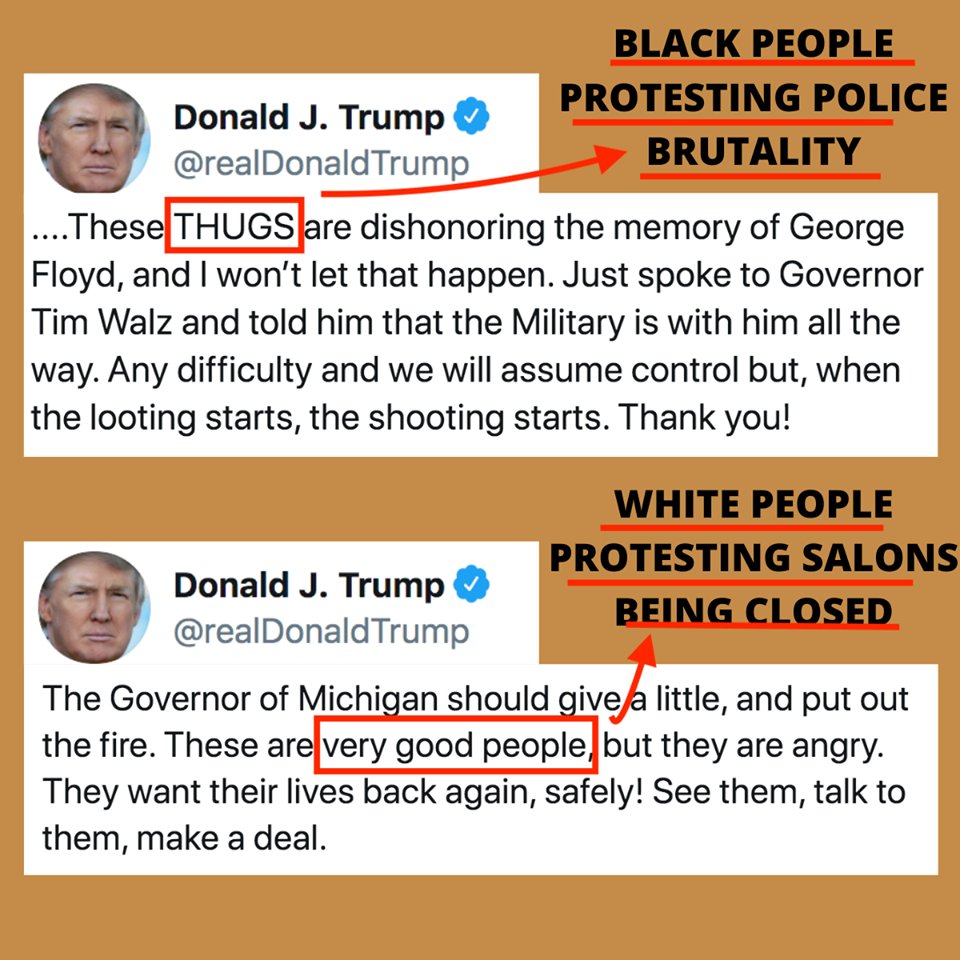 That last line from Trump, “when the looting starts, the shooting starts,” where does it come from? He’s quoting 1967 Miami police chief Walter Headley who had a long history of bigotry against the local black community. He threatened civil rights activists with his message.

“The NAACP and other black organizations had for years complained about the treatment of the black community by Miami police. At this hearing, in discussing how he would deal with what he called crime and thugs and threats by young black people, he issued this statement that the reason Miami had not had any riots up to that point, was because of the message he had sent out that ‘when the looting starts, the shooting starts,’” Lusane said.

Headley was head of the police force for 20 years and referred to his “get tough” policy on crime during a 1967 news conference as a war on “young hoodlums, from 15 to 21, who have taken advantage of the civil rights campaign. … We don’t mind being accused of police brutality.”

According to Lusane, Headley may have borrowed the phrase from Eugene “Bull” Connor, who had been the notorious public safety commissioner in Birmingham, Ala. Connor was a segregationist who directed the use of police dogs and fire hoses against black demonstrators.

“Looting leads to shooting, and that’s why a man was shot and killed in Minneapolis on Wednesday night - or look at what just happened in Louisville with 7 people shot. I don’t want this to happen, and that’s what the expression put out last night means. It was spoken as a fact, not as a statement. It’s very simple, nobody should have any problem with this other than the haters, and those looking to cause trouble on social media. Honor the memory of George Floyd!”

When asked about his use of the phrase, Trump said he was unfamiliar with its history.

“I’ve heard that phrase for a long time. I don’t know where it came from or where it originated,” Trump said. “Frankly, it means when there’s looting, people get shot and they die. And if you look at what happened last night and the night before, you see that, it’s very common. And that’s the way that’s meant.”

Trump has heard the phrase a long time…So he’s been in the company of bigots and racists for a long time.

I hate that Trump has to be involved in all of this, but the corruption goes all the way to the top. Trump’s backing of the police against the American people gives police free license to be violent and sadistic. From Trump, to police union leader Bob Kroll, to police departments across the country, they all get the message to stop protests at all costs.

The facts are clear to me. I know where I stand. I won’t support an openly racist administration; none of us should. George Floyd shouldn’t have been lynched.

What are we supposed to do? I admit I’m afraid. If I protest, I could be pepper sprayed or tear gassed. I could lose an eye or be killed from a rubber bullet. I could be arrested and potentially lose the job I’m lucky to have right now. We all have levels of risk and privilege to think about. Not all of us can be on the front lines.

If you are going to the front lines, be prepared. Expect you may suffer police brutality. Have water bottles of water and mixtures with baking soda to pour over anyone’s eyes who are sprayed.

I hope we can direct this energy to positive change. Please give where you can. Follow people like Tamika Mallory who gave an incredible speech in Minneapolis. I greatly respect the response of accounts like @i_weigh on Instagram and their promotion of active anti-racism.

For those who say we shouldn’t riot but only protest peacefully, many have pointed out the similarity to the Stonewall riots.

The Stonewall riots (also referred to as the Stonewall uprising or the Stonewall rebellion) were a series of spontaneous, violent demonstrations by members of the gay (LGBT) community against a police raid that began in the early morning hours of June 28, 1969, at the Stonewall Inn in the Greenwich Village neighborhood of Manhattan, New York City. They are widely considered to constitute the most important event leading to the gay liberation movement and the modern fight for LGBT rights in the United States.

Riots work, and people are willing to fight. 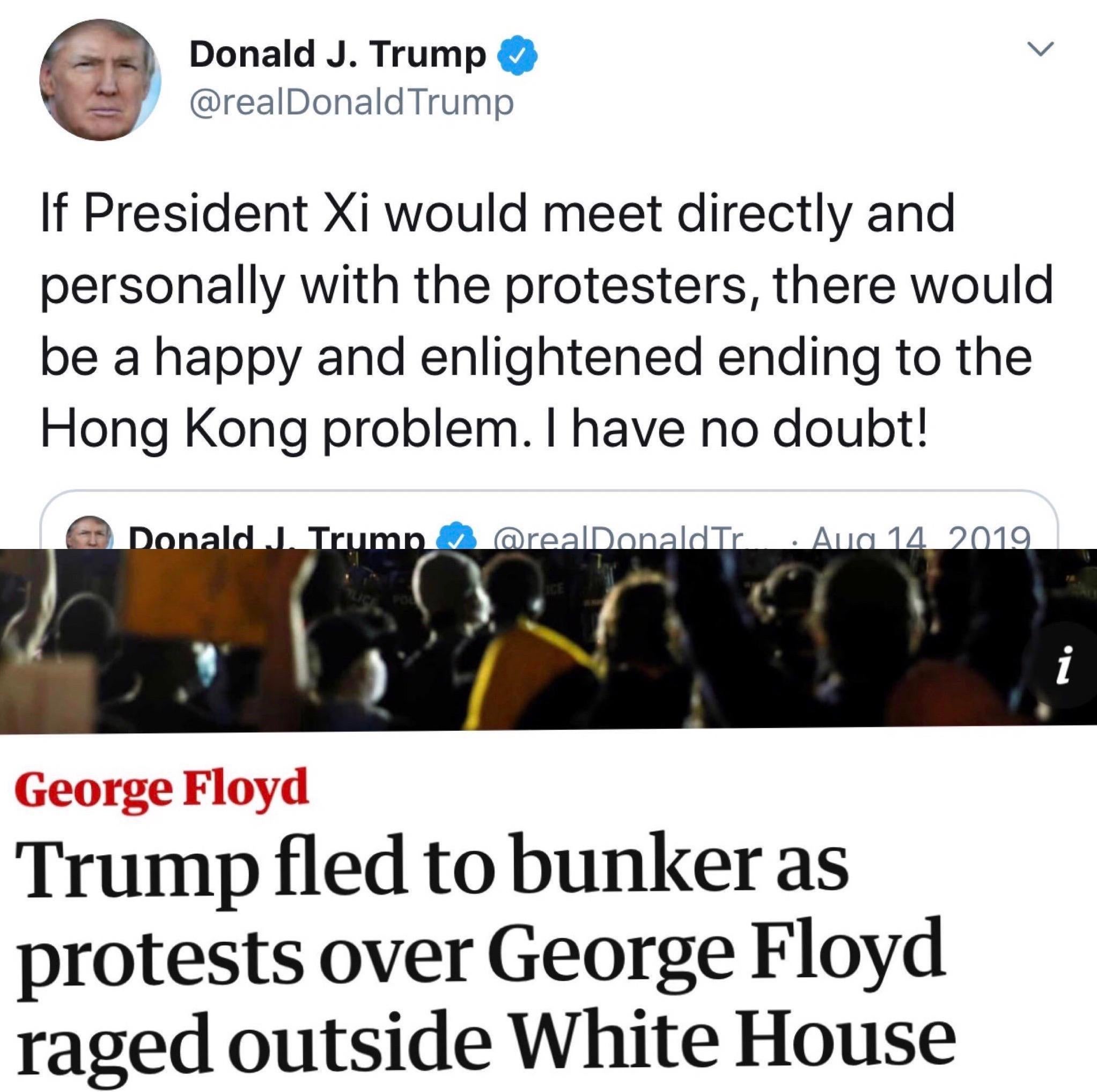